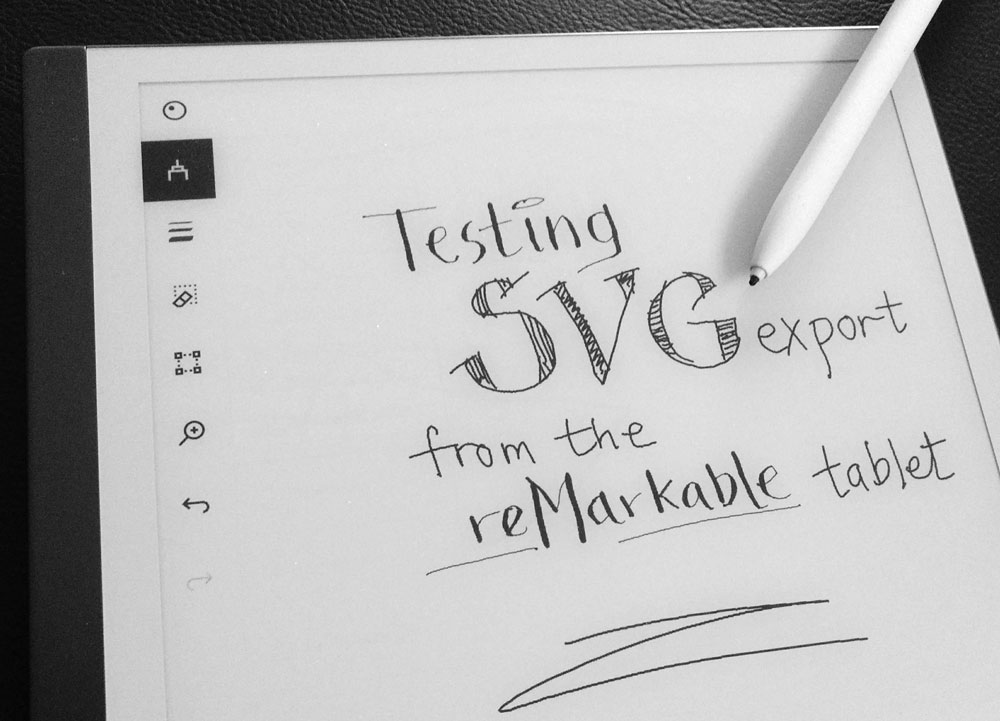 Some years ago I watched a colleage using a reMarkable tablet and I was fascinated. She took notes on a paperlike screen with no backlight. She was handwriting, sketching, drawing arrows across and making notes on PDFs. I thought it was an expensive notebook, though. Then I realized that one could export as SVG from this tablet and I got even more tempted to buy one. One of my hobbies is creating handwritten fonts for my plotter (Silhouette cutting machine) using Inkscape. This tablet has the potential of providing a whole new dimension to font creating. I struggled to find enough information on the details of the exported SVG content, but I found an example notebook with some testing where it was confirmed that true single line could be exported. So now, I’ve bought the reMarkable tablet.

The company behind the tablet is Norwegian, as I am, so I might be slightly biased, but there is no affiliate links here. I spent my own money on it and write only the truth (how I see it). With this post I’d like to contribute to describe my findings of the SVGs from reMarkable, no hacks involved, and with a focus on single line paths.

Exporting SVGs from the tablet

I know there is a lot of hacks to find for the tablet where you can access the linux file system, but as it is new and quite expensive I’d like to use the official solution to export to SVG without risk of loosing the warranty. For this you will need to have no allergies for cloud-solutions. As far as I have learned and experienced, the cloud is the only official way that SVGs can be exported. I have created a reMarkable cloud account for my tablet and have downloaded a small piece of software on my PC (and an app on my mobile). When I draw on my tablet it is synced to my PC through the cloud. From the rM software I can select export to SVG and proceed with the file in Inkscape.

Properties of the exported SVG file

Open SVG paths from the tablet

Most of the available writing tools in the example SVG above will be exported as outlines. The fineliner and the highligher are exceptions from this. These are strokes with a specific width and the paths simply follow the path your pen took on the tablet. Perfect for designing things for my cutting machine used as a plotterlike designing single line SVG fonts from handwriting.

The fineliner can be set to thin/medium/thick and will create paths with a stroke width of 2/4/6px in black, gray or white.
The highlighter have one width and color only 30px, yellow (#fff3e8, opacity 0.25).
Both fineliner and highlighter is defined with stroke-linejoin: round, stroke-linecap: butt.

I have also experienced that the slower you draw the more nodes are created. You will probably want to clean that up using some sort of simplify tools in Inkscape. The paths seem to be a bit rough. This is probably affected by the rough surface of the tablet which is why it feels like real paper. A consequence of writing slowly will alse be that your files will be larger.

The paths of the fineliner are all straight line segments and the coordinates are defined with a precision of 6 digits. Here is an exampe group and path for the thin, black fineliner.

This is what I have found so far about grouping and layers: